If you’re facing a train crash, what’s the best escape route for you? A trucker in Georgia faced this problem yesterday when he found his truck stuck on the railroad crossing. The trucker probably didn’t consider the height of the railroad grade when he tried to drive over it and, as he crossed to the other side, found the bottom of his trailer had failed to clear and he was stuck fast on the rails.

If you find yourself stuck or stalled on the rails at a railroad crossing, the experts say you should get out of the vehicle and escape in the direction of the oncoming train. However, a lot of people have a hard time understanding that rule. If you’re facing a train crash, why run toward the train? 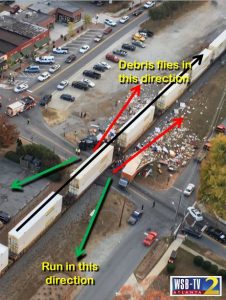 You can avoid being stuck on the tracks to begin with by; 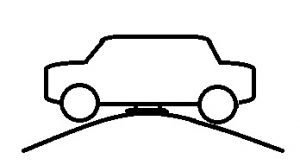 After its release less than a week ago, the new Pokémon Go app for smart phones has rapidly gone viral and is taking the world by storm.  Just like with any big storm, we can expect a lot of injuries and, unfortunately, some deaths.

If you’ve been wasting your time over the last five days paying attention to the elections in the US and Great Britain or other world events, you may not know what all this Pokémon hoopla is all about. Pokémon Go is a smartphone app that allows its users to hunt for and capture Pokémon cartoon characters in a real world environment. The free app uses the phone’s camera feature to blend the Pokémon world with the real world around you. The best way to understand it is to imagine a virtual scavenger hunt.

Those who complain that their kids are spending too much time indoors playing video games might appreciate the fact that, in order to play this game, the player has to go outside and wander the neighborhood to find Pokémon. The aim is to catch as many Pokémon as possible to earn points and get promoted to different levels. Users can also join teams and work with other team members to accumulate points.

According to news reports and social media, the game is quickly becoming addictive and, during the first 24 hours after its release, it was downloaded more than the dating app Tinder. According to SimilarWeb, the number of daily users has already equaled that of Twitter.

The problem with this game is that, in order to find and capture Pokémon, the user will have to pay attention to the screen at all times. Once a Pokémon is found, the user has to aim and fire the capture device with enough velocity to capture the creature.

This means that a lot of people are going to be wandering around with their eyes focused on their smartphone rather than the path ahead. Drivers are going to have to be even more alert for distracted pedestrians stepping into the roadway. Team members who are afraid of falling behind may be tempted to continue playing the game even when they’re behind the wheel. To play the game effectively, the player will have to pay more attention to the screen than to the road ahead.

In Missouri, a team of armed robbers waited for victims at a remote Pokémon spot. Already, accounts of cuts, bruises, and twisted ankles are showing up online. It’s just a matter of time before the first player is hospitalized or killed.

The Deadliest Period For Teen Drivers

The recent Memorial Day weekend began the deadliest period of the year for teen drivers. Known as the “deadliest 100 days,” the period between Memorial Day and Labor Day has, for many years, seen a significant rise in the deaths of teen drivers and their passengers.

The fatality increase during the summer months is due to several factors:

One might think that inexperience behind-the-wheel would also play a major role in the summer death rate and it does to an extent however, teens with the least experience have a much lower death rate than teens that have been driving a few years. Among Florida teen drivers aged 15 through 20 killed in 2014, drivers aged 15 through 17 made up only 12 percent of the teen deaths. Teen drivers aged 18, 19, and 20 accounted for 88 percent of the teen deaths during the deadliest period.

The death rate among older teens may be due to the fact that the older teens, after getting over the initial fear of solo driving become less cautious and more complacent. Another reason is that restrictions imposed on younger drivers by Graduated Driving Laws (GDL) are generally lifted by age 18 and teens who exercised caution during their probationary driving periods have now thrown caution to the wind.

Teen passengers are a major distraction for teen drivers and that’s why many states restrict the number of passengers a teen driver can carry under their GDL laws. The lifting of both cell phone and passenger restrictions at age 18 is probably a major factor for the deaths among older teens during the deadliest period.

No matter what state law may say, parents can still impose their own driving restrictions on teens. Parents can limit the number of passengers to reduce distractions and they can ban the use of cell phones while driving. Parents who set the example by limiting their own use of cell phones and other distracting behaviors while driving stand the best chance of getting their teens to obey the rules.

Where Is Road Rage The Worst?

A new survey has come out listing those states and cities with the worst instances of road rage. This study, using some different methodology has some surprising results compared to studies in the past.

Past studies we have written about were sponsored by AutoVantage, an online insurance company. To conduct those studies, AutoVantage conducted phone interviews with 2500 drivers in 25 major metropolitan areas. The latest study, conducted by AutoInsuranceCenter, another online insurance company, looked at 65,535 Instagram posts that were hashtagged #RoadRage. The results of this study showed where and when the greatest number of road rage incidents were happening.

According to the Instagram posts, the greatest number of road rage incidents occurred:

Surprisingly, the state with the greatest number of Instagram road rage posts was Hawaii. A vacation paradise isn’t normally what most people would connect with road rage. However, as anyone who lives in a tourists center, like Orlando for example, knows large numbers of tourists trying to navigate around a strange city can be extremely frustrating. Tourists also tend to bring their bad and discourteous driving behaviors with them when they go on vacation and that can also be very frustrating.

The last AutoVantage study listed Houston, followed by Atlanta as the cities where road rage was most likely to be encountered. The new study by AutoInsuranceCenter lists Los Angeles, followed by New York City as the worst cities. Houston and Atlanta fell to eighth and tenth place respectively.

A study that depends on Instagram messages may not be highly accurate because it depends on people posting an Instagram while they’re still angry enough to do something about it. If they were to wait until they got home, they may have calmed down enough to let it go. However, drivers who tend to post on Instagram while driving are probably adding to the problem by not watching the road ahead.

One way to stay out of trouble is to decide on a plan before you go out to drink. If you decide beforehand that you’ll use a designated driver or call a cab to get home, chances are that you’ll stick with that decision but, if you wait until after you’ve been drinking and your judgment is affected, you may not make such smart choices. If you feel you must drink, here are a couple of spring break apps that, hopefully, will keep you out of trouble.

ENDUI (as in End DUI) is an app that warns you if you’ve had too much to drink. The user plugs in their sex, height, and weight and then, by telling it how many drinks have been consumed, it calculates your approximate Blood Alcohol Content (BAC). The app also has games that can test your reaction time. If you decide, before you go out, to limit your drinking, this can be a good tool to warn you when you’ve reached your limit. However, the app only gives an approximate BAC and can’t be used to determine your actual BAC. One drink, such as certain cocktails can have several shots and have up to four times the alcohol content of a typical drink. Only a breathalyzer or blood test can give an accurate BAC reading.

Another app called “SaferRide”, created by the National Highway Transportation Safety Administration (NHTSA), doesn’t try to determine your BAC but, instead, can locate and call a local taxi service for anyone who needs a ride home. It can also hold a list of designated drivers that the user pre-programs into the app. This app is ideal for those on vacation in an unfamiliar city.

Both of these handy spring break apps are free and available for download:

Remember that buzzed driving is impaired driving. Make your spring break a fond memory and not a regret.

Visit all of our Blogs